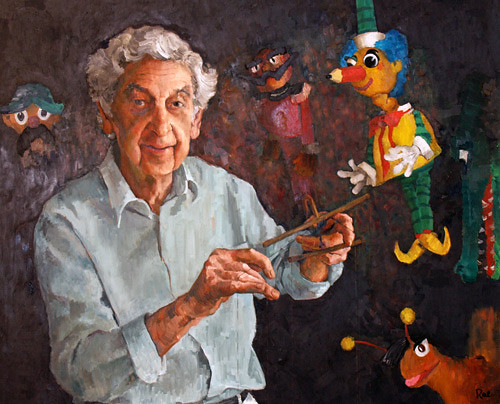 A contemporary of Normal Lindsay and Emil Mercier, Norm Heatherington worked with both these talented artists while working for The Bulletin Magazine, after a stint in World War II. His foray into puppetry was by accident when he allegedly saw instructions on how to make them from old inner-tubes in an issue of Popular Science Monthly Magazine.

He took his puppetry into the public arena in the late 1950's when he made a short lived series for the ABC called "Nicky & Noodle", which was followed by a Channel 7 series a year later called "Jolly Gene and his Fun Machine". Two years later he pitched a story idea back to the ABC, about a Moon-Man who came to visit Earth and made drawings from inexplicable squiggles on paper. The series was supposed to be a short-lived filler, but instead lasted 40 Years until 1999. That series was "Mr Sqiggle". Squiggle, along with his spaceship Rocket, was joined by a curmudgeonly easle named Blackboard and a fun-loving accident prone Bill Steam-Shovel for a weekly show, which delighted children and adults alike. All scripts for the show were written by Norman's wife, Margaret.

Not only was Heatherington a cartoonist and illustrator of note, but as most would realise, he manipulated Mr Squiggle and drew most of his 'squiggles' upside down from behind and above the backdrop of the ABC set. Heatherington is also credited by many with creating the character of "Emu" for Rod Hull, who took it to Channel Nine in Sydney for "The Super Flying Fun Show" Children's Morning program.

As a very personal note: When I was 5, my grandmother took me to Grace Brothers Broadway (the current Broadway Shopping Centre) where 'Mr Sqiggle' was appearing 'Live'. They performed a live 'episode' of the show every 2 hours, and as a birthday present, Mr Squiggle drew me a train, made out of the number 5 (for my age). It's one of my fondest memories, and I hope it is still around my 'archives' somewhere.

Norman received several honours and awards, including the Penguin Award in 1984, and 1989, from the Television Society of Australia. He was also awarded an Order of Australia in 1990 for 'service to children's television and puppetry, the (COFA) Dean's Award for Excellent in Art, and the coveted Jim Russell Award for his Outstanding Contribution to Australian Cartooning.

Heatherington died December 6th, after long illness. He was 89.